Turning the Everyday into Lions and Witches: The Art of Costumes and Storytelling at Cardinal Stage by Julie Warren

They say the clothes make the man, but in the case of theatre performances, the costumes make the characters. Each aspect of a production adds to the development of the story, but the clothing and accessories are a visual representation of who the characters are, when and where they live, and what they do. “When an actor enters, one notices immediately what he or she is wearing. From there, the viewer can perceive and make judgments about that character,” says Kayla Cieslinski, costume designer for Cardinal for Kids’ production of The Lion, The Witch, and The Wardrobe. 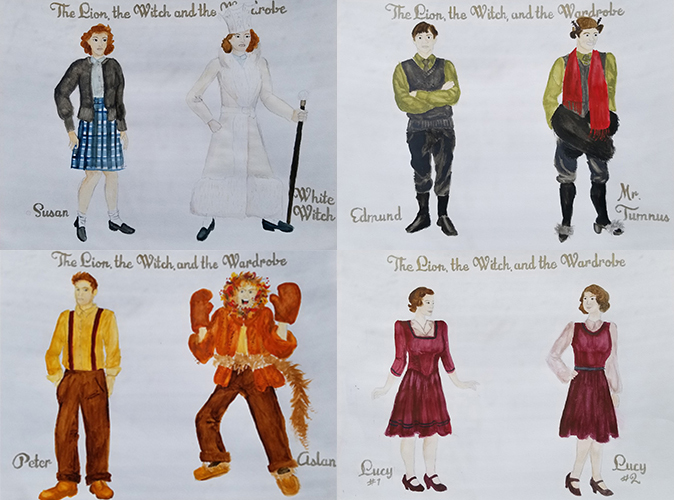 Cardinal Stage’s production of ‘The Lion, The Witch, and The Wardrobe’ transforms a small cast into the magical creatures of Narnia using everyday objects. | Sketches by Kayla Cieslinski, costume designer

As with every production, Cieslinski starts the costume design process by reading the script several times to analyze every nuance of the play and characters. She meets with the director and they determine how the costumes will look and what they will portray. Then it’s hours of researching the styles of the time and setting of the story, finding fashion ideas that match what the characters will present. She sketches her ideas to share with the director, using feedback to make revisions until the final concepts are approved. Then it’s on to finding, or in some cases making, articles of clothing that fit that vision.

With this particular production, there were some unique challenges. The show’s director, Jenny McKnight, wanted to approach it in a way that encouraged imagination and showcased the magical creativity of the children characters so adult audiences could feel “the joy of believing in magic, of embracing mystery, of loving our power to remember.” Many in the audience will be familiar with the fantastical story from either the book or the movie, but the Cardinal Stage version will be unique. “We will focus not on the spectacle but the importance of remembering, reenacting, and sharing our stories,” McKnight says.

The costumes will be a primary mechanism for telling the story and conveying the themes of imagination and magic. “Costumes will be quite important because we have a big, beautiful wardrobe that features prominently in the story and design, so we look to that for inspiration on how the costumes appear and how they are used,” says McKnight.

To manifest that vision, Cieslinski was tasked with creating costumes of fabulous characters like Aslan the Great Lion and the White Witch using only items you could find in a child’s room. “Using just items found in the children’s room could potentially get silly or haphazard. I had to get creative to determine how I was going to make everyday objects into a lion, witch, or faun,” Cieslinski says.

With these considerations, the costumes still needed to convey the fantastical nature of the characters. The Pevensie children live in the real world, but through the magic wardrobe they are able to visit the wintry world of Narnia. The costumes had to convey that transition from children in the normal world to imaginative beings in a wonderland. McKnight explains, “We had to find a balance in having costumes that were both otherworldly and still found objects from the children’s playroom.” Thankfully, Cieslinski was up to the challenge. “Kayla has done a great job of finding creative ways to use everyday objects to turn ordinary people into extraordinary lions, witches, fauns, and statues,” McKnight says. 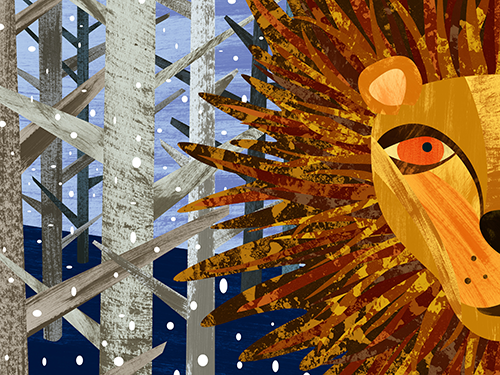 This family-friendly adaptation of C.S. Lewis’ classic has a one-hour run-time. Check out available showtimes here.

Costumes don’t just help the audience to better understand a character; they help the actors as well. “For some actors, the character isn’t complete until they are in costume,” says Cieslinski. This is why dress rehearsals are so important, so the actors can fully visualize themselves in the role. It’s also an opportunity for costume designs to be adjusted after the director and designer see them on the actors with a full set, lighting, and movement. Cieslinski explains, “In that last week of rehearsals, I can make tweaks and correct costumes to make them ready for the audience.”

Costumes play a vital role in a theatre production. It’s easy to take for granted the way a character is dressed because audiences process it as part of that persona; their clothing is as much a part of them as their hands or voice. But costume design is a thoughtful and detailed process, creating a visual projection of a personality, setting, and relationship to other characters. As Cieslinski puts it, “Costumes give the audience an opportunity to perceive the characters for who they are.” In the case of The Lion, The Witch, and The Wardrobe, the costumes will help present a lion, a witch, and a fabulous world of imagination and creativity.