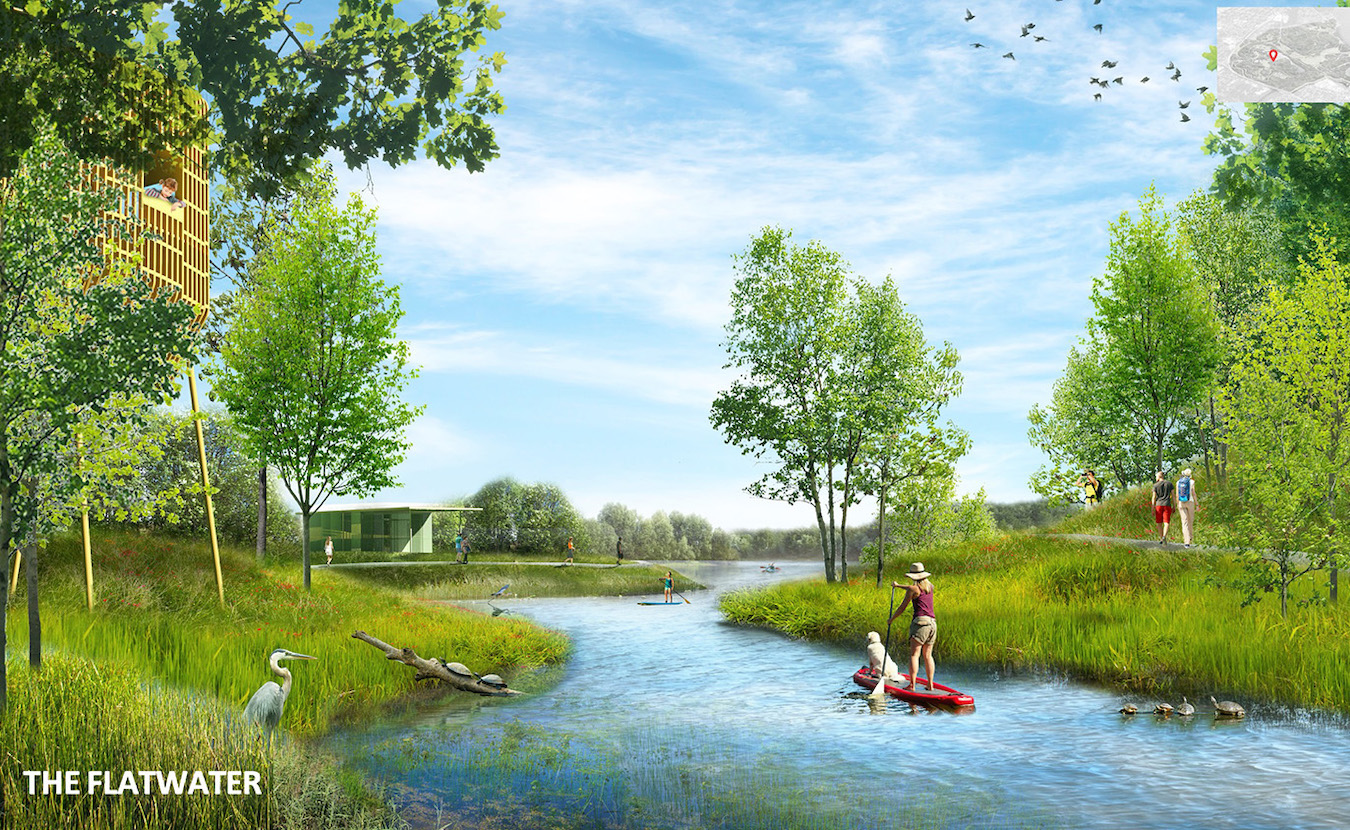 Origin Park is a 600-acre urban park project along the Ohio River that will connect Jeffersonville, Clarksville, and New Albany, Indiana. Encompassing the Falls of the Ohio State Park and Ohio River Greenway, the park will feature 35 miles of park lawns, 22 miles of trails, and 4.5 miles of paddle trails. One of the highlights of the park is called the Infinity Loop, a 2.8 mile elevated trail that will allow visitors to walk over the river. Illustrated above is a section called The Flatwater. | Image courtesy of River Heritage Conservancy, Inc.

[Publisher’s note: This article was written by Beth Edwards of the The Indiana Environmental Reporter, an independent reporting organization supported by The Media School at Indiana University and IU’s Environmental Resilience Institute.]

An ambitious project on the Ohio River will create a major park that will turn floods into an attraction.

When the Ohio River floods, the majority of parks and green spaces that line its banks are unusable. But a new park in Clarksville will turn those flooding events into an attraction, making it the first climate-resilient park in the Midwest.

Origin Park is an ambitious 600-acre project led by the nonprofit River Heritage Conservancy. It will encompass the Falls of the Ohio State Park and Ohio River Greenway, creating an urban park that will connect three southern Indiana towns — Jeffersonville, Clarksville, and New Albany, just across the river from Louisville, Kentucky.

“This is the last wild space in our urban core, and it’s high time that it had a higher and better use than being a throwaway wasteland,” said Scott Martin, executive director of the River Heritage Conservancy. 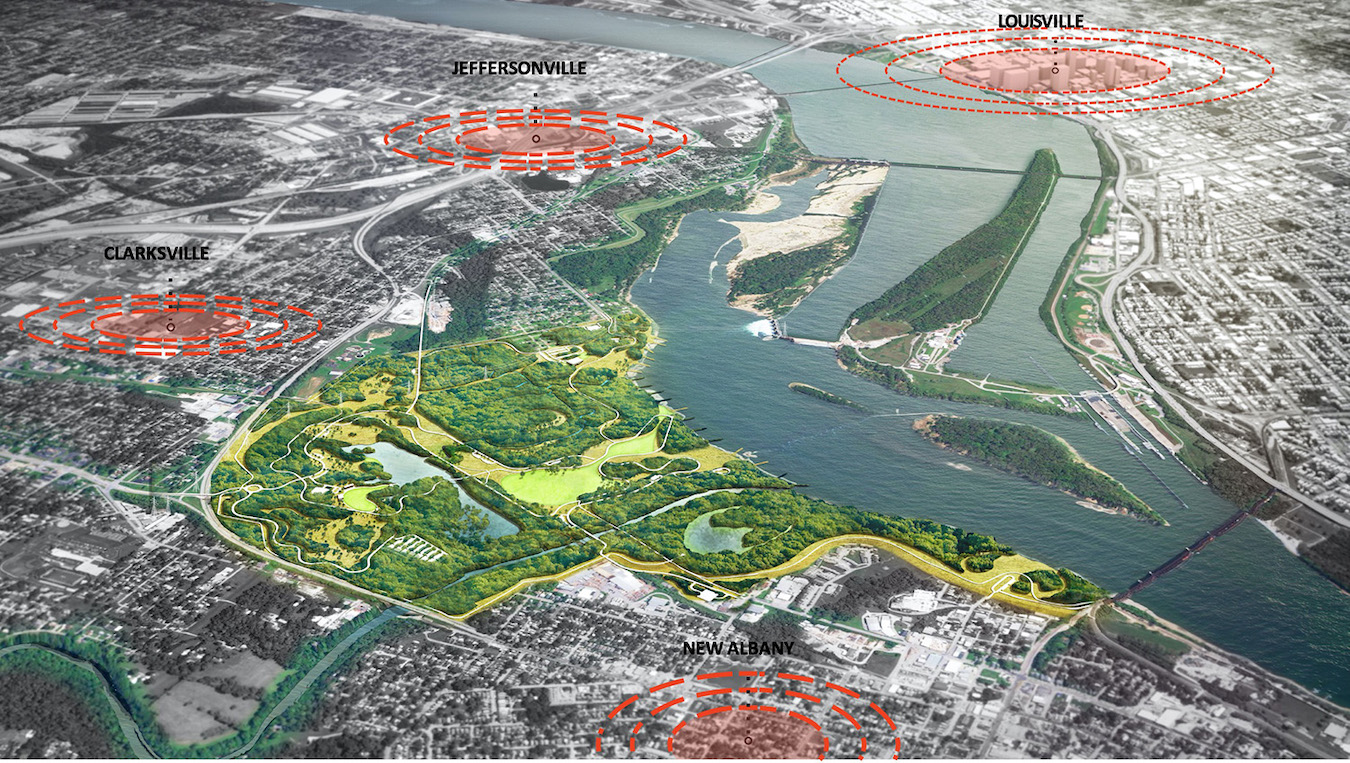 River Heritage Conservancy (RHC) will create 150 acres of new meadows and plant 75,000 new trees to help with urban heat island effect on land that has previously been used as a junk yard and for industrial waste.

Origin Park will also feature 35 miles of park lawns, 22 miles of trails, and 4.5 miles of paddle trails. One of the highlights of the park is called the Infinity Loop, which is a 2.8 mile elevated trail that will allow visitors to walk over the river.

Architect Lucinda Sanders, CEO and partner at OLIN, said in a statement, “The implications for this project are huge for this region. I see this park as a place that can transform people, particularly with regard to their relationship with nature — how they interact with, think about, and become one with nature.” 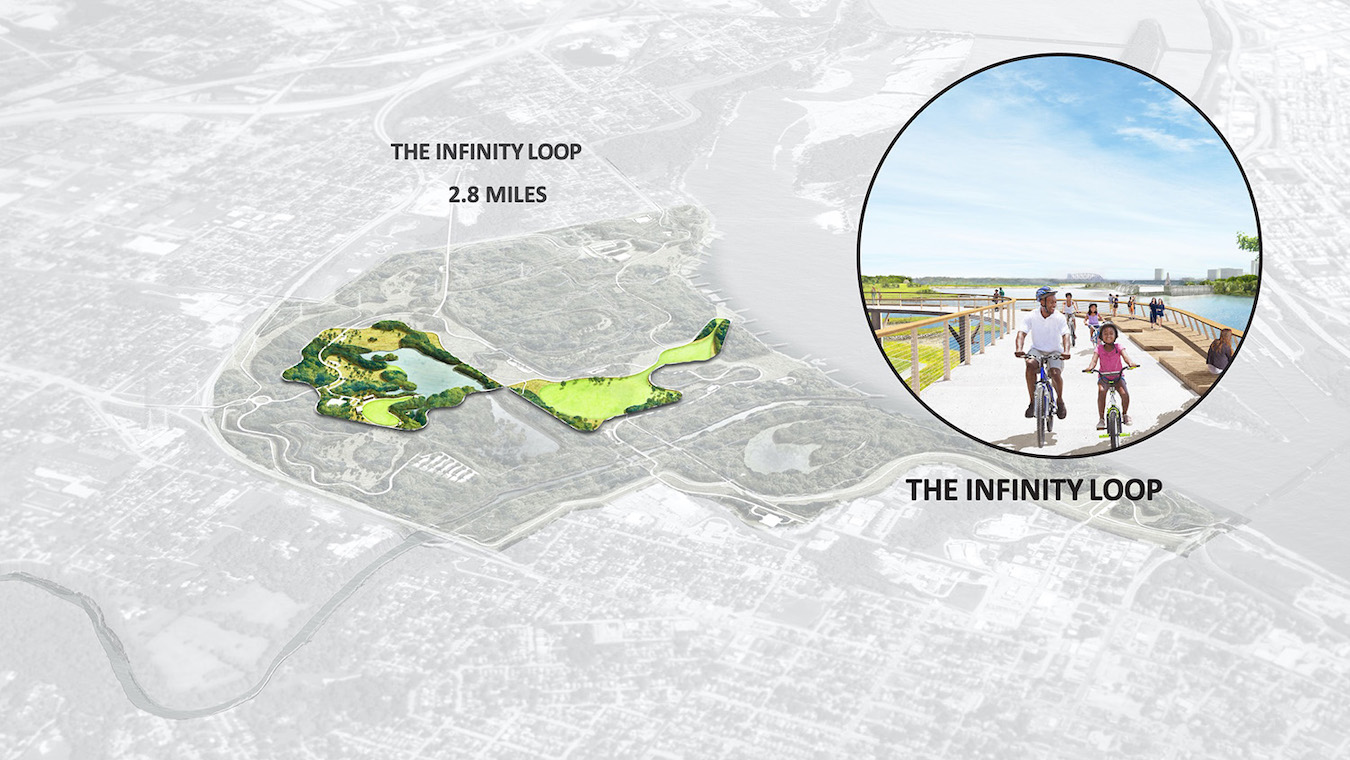 This will also be the first park in the region designed by a female lead architect.

The land for Origin Park sits outside of Clarksville’s levee system. The flood wall was built after the 1937 flood that left 90 percent of Clarksville and Jeffersonville submerged under water. Instead of seeing the flooding as an obstacle, Martin views it as an attraction for the park.

“It’s an amphibious park, whether it wants to be or not,” he said. “Rather than resist that, we made the intentional decision at the beginning of design to say climate change is happening. In fact, the site is going be wetter in the future.”

Ryan Ramsey is the president of the Clarksville Town Council and helped bring the Ohio River Greenway into fruition. He has been working with RHC on Origin Park.

“Flooding has always been a part of life on the Ohio River, and predictions that changes in our climate will add measurably to the level and frequency of those floods make it imperative that we understand what is happening and integrate those facts into our lives,” he said. “The creative and innovative design of the new Origin Park can help make that happen.” Martin says they plan to build infrastructure in terms of raised decks and bridges that invite the public to come and see flooding events.

“We want the public to see those big river events,” he said. “In the Midwest, we don’t have any opportunities where you feel the power of nature. We don’t have the Tetons that frame how small we are, or the ocean. We think the power of the Ohio River juxtaposed against an urban landscape has the ability to put people in close relationship to Mother Nature at her most fierce….”

Kevin Baity, the town manager for Clarksville, said the park’s unique design will allow people to safely engage in their curiosity to get a closer look at the river in flood.

“In fact, some of the park’s planned events can only be found [or] participated in during these flood events,” he said. “The advantage is that unless the flood waters exceed what the current levee system is designed for, the park will still continue to function and entice visitors.”

Martin said what makes the Clarksville park unique is its amphibious nature, which allows it to pivot from wet to dry and still be something the public can appreciate. 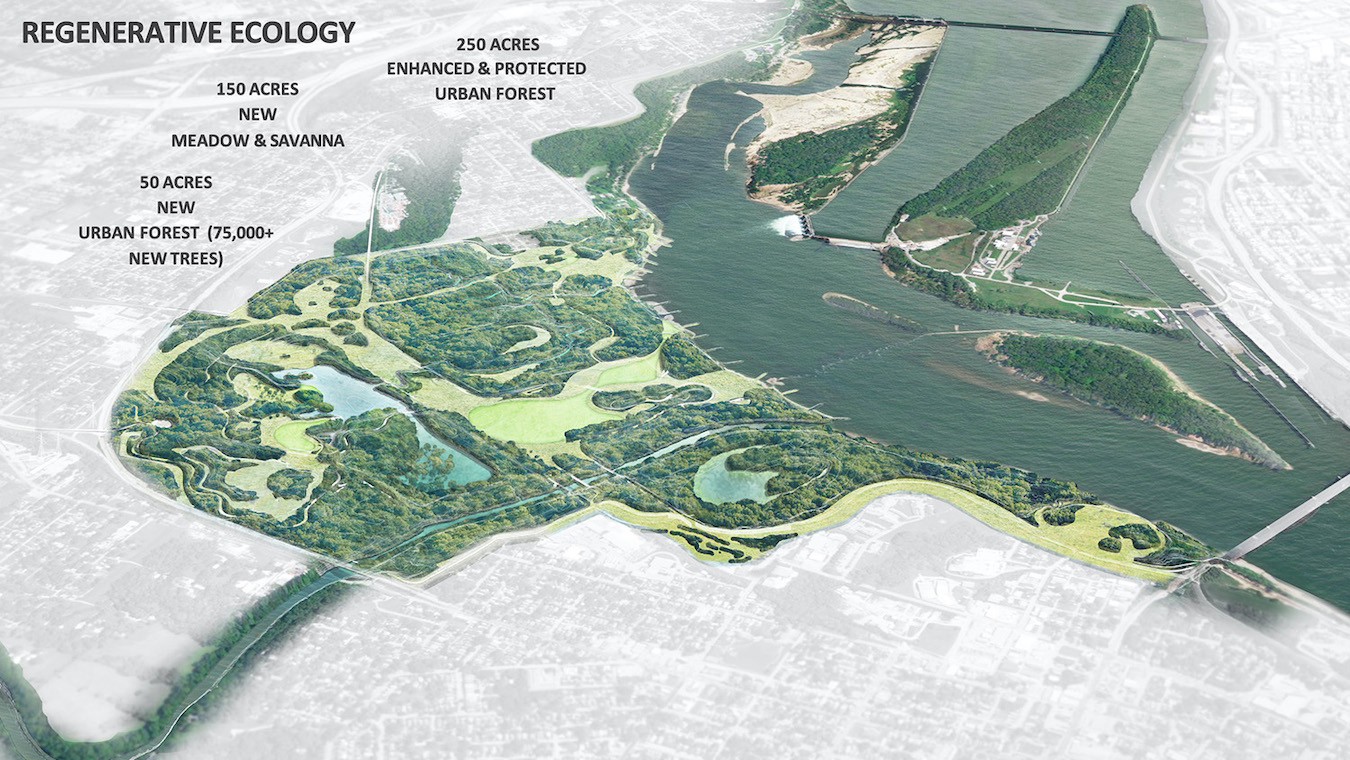 “When you build a park, you build a park for 100 years from now,” Martin said. “The best day of this park could be long after I have departed this earth. So you want to make sure you’ve built the best landscape that can mature and grow in that way.”

RHC and OLIN are also committed to helping restore the biodiversity of the area, as much as they can. They will consult with botanists and horticulturists to see what species of native and non-native plants will blend the best to support the wildlife and be resilient to the weather conditions of the area.

Martin hopes the project will elevate the wildness that surrounds the community, which he said is often overlooked.

“What’s neat about our part of the world is the park will have a different personality four times a year,” he said. “Each season will bring you a new park.”

Baity said that once Origin Park is completed, residents will benefit in both quality of life improvements and financially.

“This is a great boost to quality of life, to the walkability of our community, to the home prices as consumers look for these amenities during their searches. Now, with COVID-19, getting outdoors and away from their work- [and] school-at-home routines is taking the place of gyms and school PE,” he said. 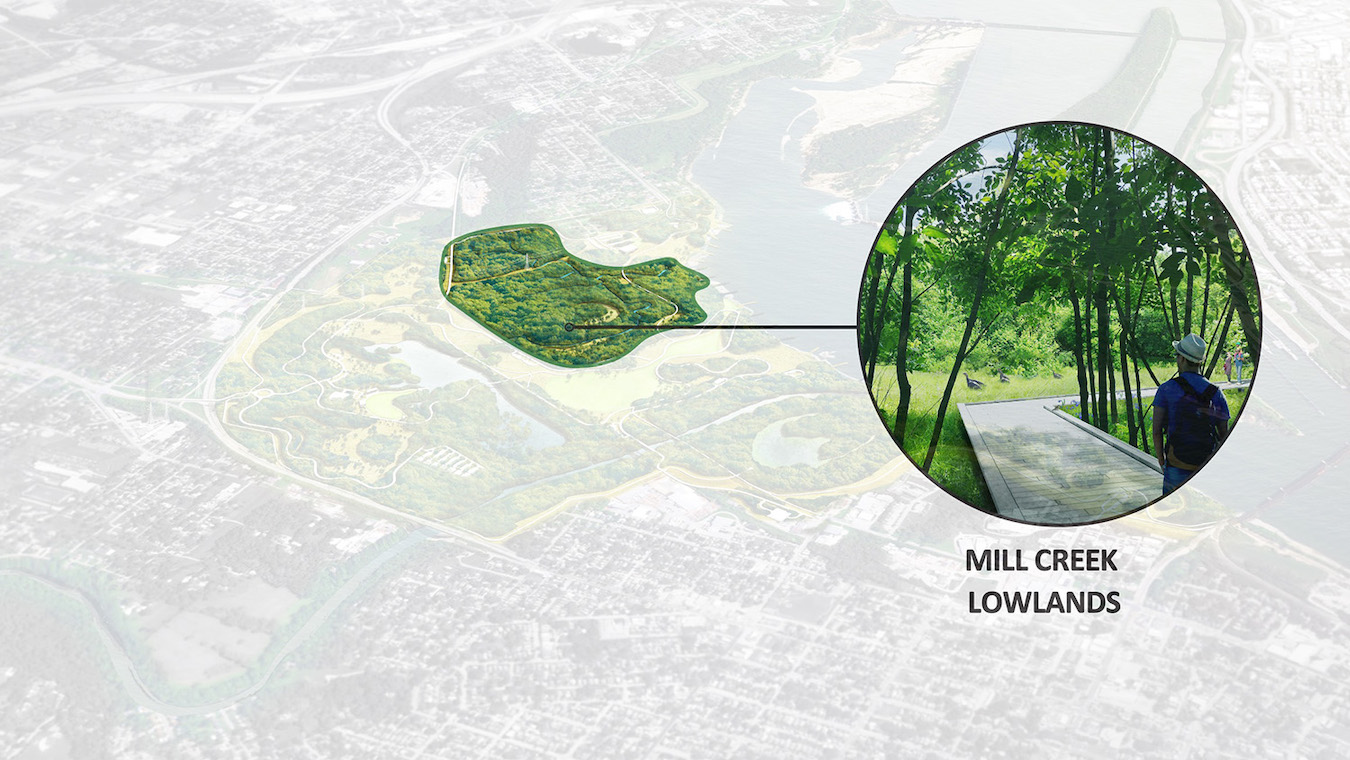 with citizens, business leaders, the philanthropic community, and public sector. The site will consist of several sub-parks that will join to make one larger park. RHC will determine which smaller park to develop first and will begin capital fundraising for that park early next year.

The initial budget for the entire park is $130 million. RHC has already raised $10 million of that and has purchased 40 percent of the needed land. RHC will need to acquire the remaining land through agreements with private land owners.

It is estimated that the park will take 20 years to complete.

Martin says it has been a bit challenging to advance the ambitious idea of shaping the trajectory of the city and region in the midst of the COVID-19 pandemic and current civil unrest. However, he isn’t daunted.

“I’m a bit of a park historian, so I look at some of our nation’s largest park projects. Central Park was built during the Civil War. The East Bay Park District in California was built in the heart of the Depression. So sometimes we find the capacity in these dark days to do our best work,” he said.

Baity and Ramsey are proud of the collaboration among government and nonprofit agencies in making the park a reality.

“For the park, it is seeing state and federal agencies come together with municipalities and the River Heritage Conservancy to jointly venture on a project that can have such an impact on not only the local residents but be an attraction for the entire Midwest,” said Baity. 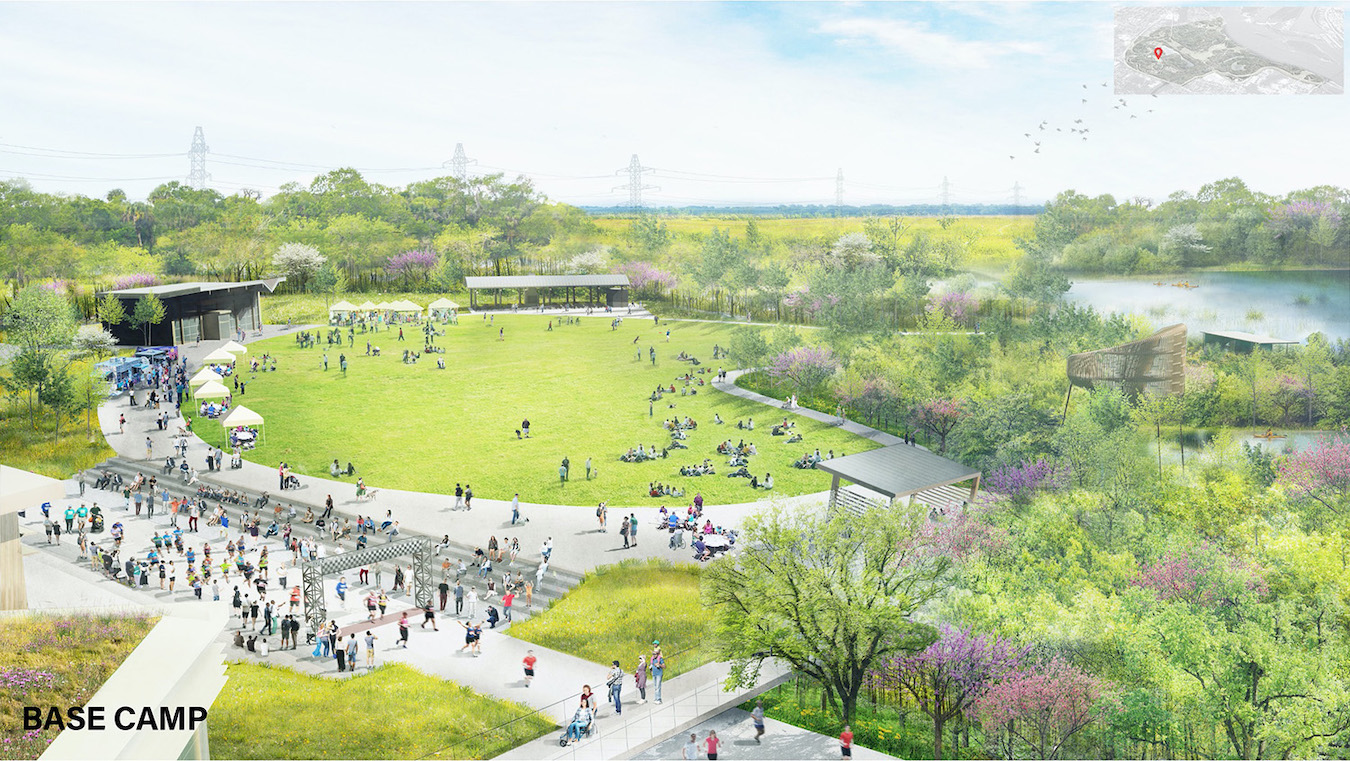 Ramsey said the building of the Ohio River Greenway shows river communities have the capacity to work together on a broad spectrum of issues.

“There is strength in unity and cooperation,” he said.

Most residents have supported the project so far, although some are skeptical. Baity hopes they’ll change their minds when they see the scope of the park, which he likens to Central Park in New York City.

Martin said he hopes to make an announcement by the end of the year about the progress of the park and when construction could begin.

Sanders says she is excited to begin the project. 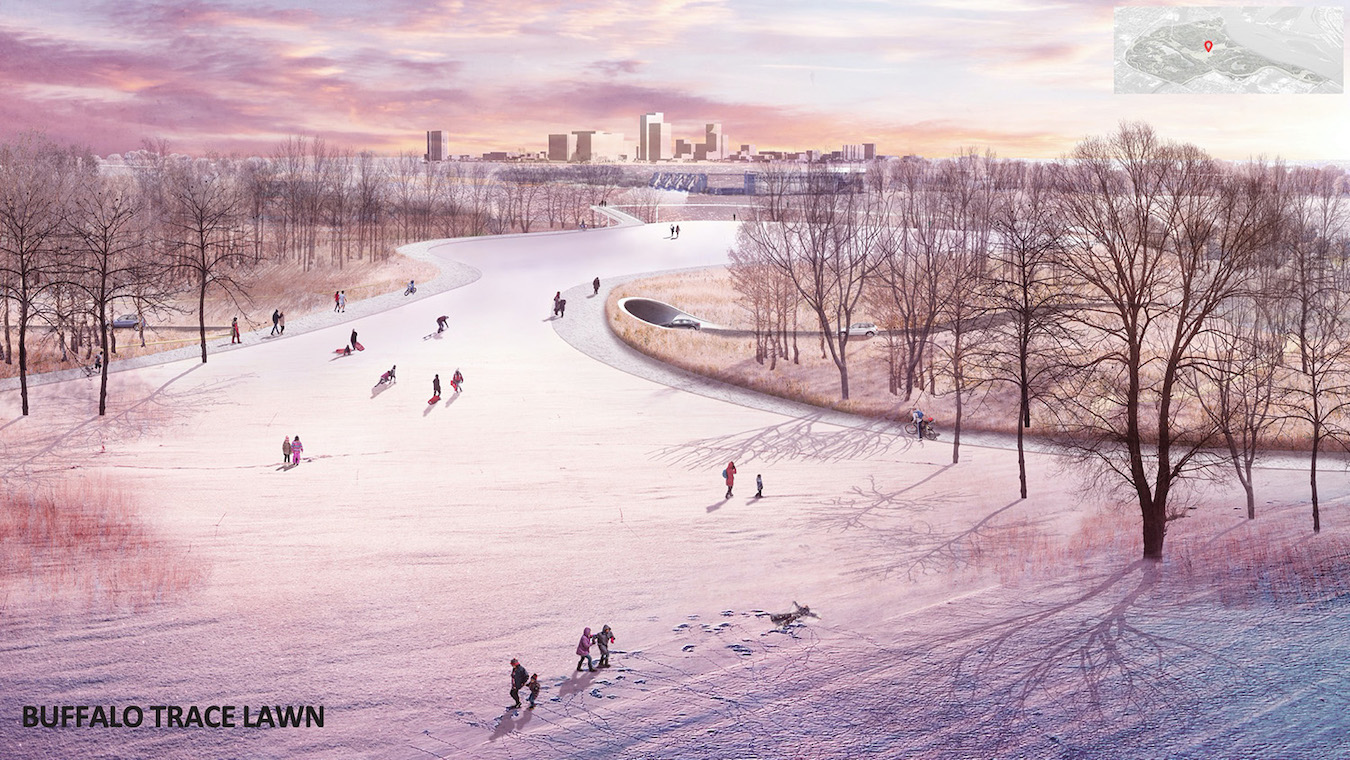 “This is also a moment when Southern Indianans can claim their own identity,” she said. “A park like this can demonstrate this region’s abundance, beauty, and pride to people across the country. We can’t wait to sit down at the table and roll our sleeves up with River Heritage Conservancy and local collaborators. We’re excited by the possibilities, and we’re eager to get started.”