8 Fun and Weird Hoosier Places to Explore This Summer

Southern Indiana may not have an ocean where you can escape the heat and humidity, but plenty of odd and interesting places await you this summer. With a fascinating history of prisoners, squirrels, and utopian societies, Indiana holds some weird and wacky destinations. Below are eight ideas for your next weekend trip, because who says mugshots and mini Statues of Liberty aren’t Instagram-worthy?

The tagline for Wolf Creek Habitat, “come and play with the wolves,” may sound a little intimidating, but don’t be fooled. There are plenty of puppy kisses here. For more than 20 years, owner Kathy Baudendistel has been raising wolves (and has even perfected the howl) at her Brookville rescue and sanctuary, two hours east of Bloomington and an hour from Cincinnati. With 38 wolves living there currently, you can observe the full-grown wolves of various sizes and colors from an observation deck, or for $50 put yourself in the danger zone (not really, they seem quite lovable). 4099 Wolf Creek Rd., Brookville. Open Saturdays and Sundays, 11 a.m.-5 p.m. 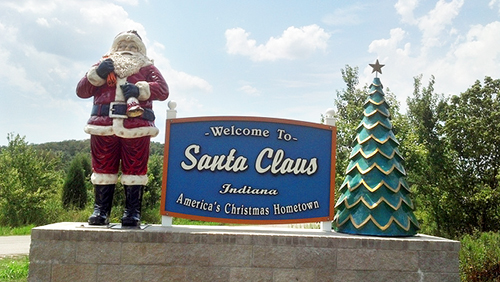 Take ‘Christmas in July’ to a New Level

The Christmas-themed town of Santa Claus, Indiana, is two hours south of Bloomington and has more to offer than a waterpark and the Lincoln Boyhood National Memorial five miles west of town. In fact, there’s no shortage of odd activities for a day or full weekend trip, but a sure way to get wacky in the summer heat is to dive into the holiday spirit. Confuse your out-of-town friends by sending a postcard from the Santa Claus Post Office. Down a frozen hot chocolate from Santa’s Candy Castle while you chat with elves or even sit on Santa’s lap at Santa Claus Christmas Store (be sure to highlight your summer attire, just for extra shock value). 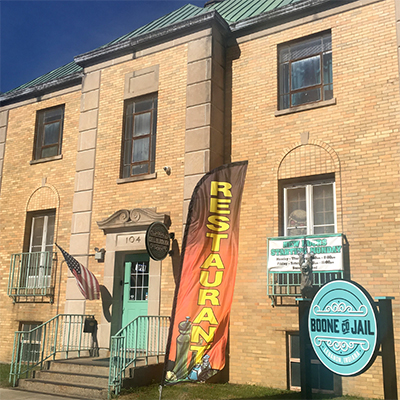 Learn about the Boone County Jail, dating back to 1938, while you eat. | Photo by Eric Fischer

Follow in the footsteps of prisoners at one of Lebanon’s darker haunts, Boone County Jail Restaurant & Bar (also known as Cell Block 101). The Boone County Jail-turned-dinner spot dates back to 1938 and serves classic American fare ranging from cheese curds and burgers to buffalo chicken wraps. When you’re not eating, you can learn historical facts about the jail and its prisoners and even take a mugshot in the former solitary-confinement area. An hour and half north of Bloomington, it’s a nice half-day trip and easy trek from Indianapolis. 104 W. Washington St., Lebanon. Monday-Thursday 11 a.m.-8 p.m., Friday and Saturday 11 a.m.-11 p.m. 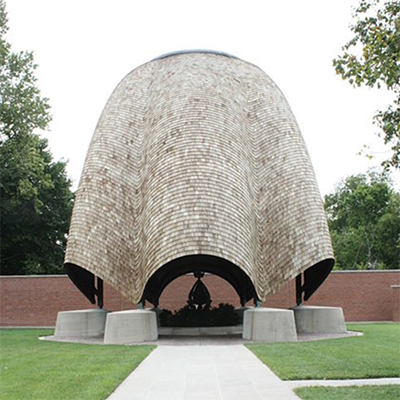 New Harmony has many unconventional sites, such as the roofless church (pictured here). | Photo by Sarah Ewart

Step Back into Indiana’s Utopian Past

Indiana’s historic New Harmony sits along the Wabash River and saw two utopian communities try to make their visions a reality in the 1800s. This town now has several delicious cafés, a spa, and contemporary art galleries, but you can stay true to the town’s origins by sticking to the unconventional. Contemplate your life in both the Roofless Church (corner of North and Main streets, New Harmony), built in 1960, and the Labyrinth (South Main Street, New Harmony), a courtyard maze. Paranormal enthusiasts can stick around after dark for ghost walks with Haunted New Harmony ($15 per person, check website for schedule). Or keep your trip in this realm and visit the Working Men’s Institute Museum and Library (407 Tavern St.), said to be Indiana’s oldest continuously operating library.

Browse a Collection of Small Statues of Liberty

While we may be more than 750 miles from New York City, Indianapolis’s new east-side museum brings the Big Apple’s symbol to the Midwest in both small form and great numbers. Indy’s Teeny Statue of Liberty Museum is teeny (the space measures 9 by 16 feet) and so are its memorabilia. Owners Julie Crow and Tim Harmon’s 500 plus (and growing!) items — ranging from Jim Beam bottles to condoms — are the culmination of over 33 years of collecting. 2907 E. 10th St. Indianapolis. Open Wednesday-Friday noon-6 p.m., Saturday 10 a.m.-6 p.m., Sunday noon-5 p.m., entrance 50 cents. 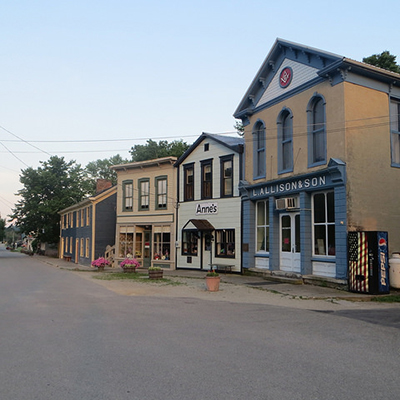 Speaking of random collections, Grannie’s Cookie Jar & Ice Cream Parlor in Metamora, Indiana, won the Guinness World Record for the largest collection of cookie jars in 2012, with 2,653 jars. And that number has reached more than 3,100 today.

Just over two hours east of Bloomington (and fewer than 15 miles from Wolf Creek Habitat, mentioned above), you can visit this local favorite for sweet treats — each homemade waffle cones comes with a kiss, but you’ll have to try one to know they mean — while you peruse the cookie jars from various time periods and styles. 19041 Lovers Lane, Metamora. Open daily 10 a.m.-7 p.m.

Make it a full day trip in Metamora and check out the aqueducts and canal networks on a horse-drawn canal boat named Ben Franklin III. May-October, Wednesday-Sunday. Call 765-647-6512 for reservations. 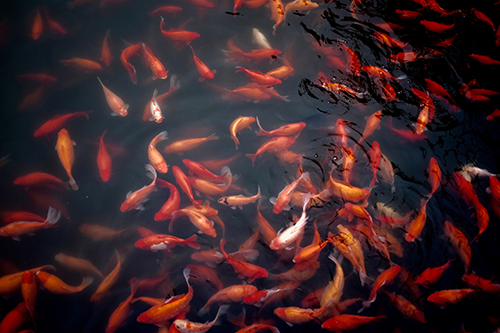 Tour a Goldfish and Koi Hatchery

Martinsville is known for for many things, but one overlooked aspect is its role in the goldfish hatchery industry. Its origins date back to 1899, when Eugene Shireman found his newly inherited land wasn’t suitable for farming but thought it might be a great place to raise goldfish. He was right, and soon Martinsville became known as the “Goldfish Capital of America.”

The hatchery was named Grassyfork Fisheries and in 1970 was acquired by Ozark Fisheries. Today, you can catch a glimpse of this multibillion-dollar industry that supplies pet stores and food for larger pet fish at their Martinsville location, which is now also the company’s shipping center. Grab a group of friends and organize a tour that includes the spawning facilities of goldfish and koi, production ponds, and “photo opportunities along the way and plenty of time for Q&A,” according to their website. 2195 Old State Rd. 37 N, Martinsville. Minimum ten people for a tour, call 800-775-3474 for reservations. 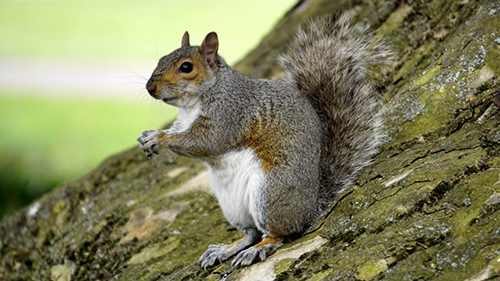 Marion County’s Calvin Fletcher wrote in his diary in 1822 that squirrels swarmed “in several places in almost countless numbers.” | Photo by Mikes Photos

Imagine an Invasion of Squirrels

Why would one farmer kill 248 squirrels in three days? Because the species invaded the first settlement of any significance in Marion County (which would later become the Indianapolis state capital we know today), killing crops, blanketing fields, and burrowing underneath wagon wheels, making life unbearable. This surreal phenomenon, called the Great Squirrel Invasion of 1822, gave Indianapolis farmers one of the worst autumns of the 19th century.

The great news is that instead of having to live it, you can read firsthand accounts and visit the sites the animals decimated. You get to simply imagine the panic! Though they technically overran nearly all of Marion County, the invasion passed through the land where the present-day intersection of 38th and Fall Creek Boulevard now sits, according to Oliver Johnson, whose accounts appear in Howard Johnson’s A Home in the Woods: Oliver Johnson’s Reminiscences of Early Marion County. So as you head to the Indiana State Fair in August, look around near the BP gas station and the entrance to the Fairgrounds and envision the army of rodents terrorizing the helpless humans they encountered in their stampede.

If you venture to any of these weird and wacky places, or encounter others, let us know what you think — either email us, tag us on FB or Instagram or add a comment below. Click here for even more Hoosier road trip suggestions!