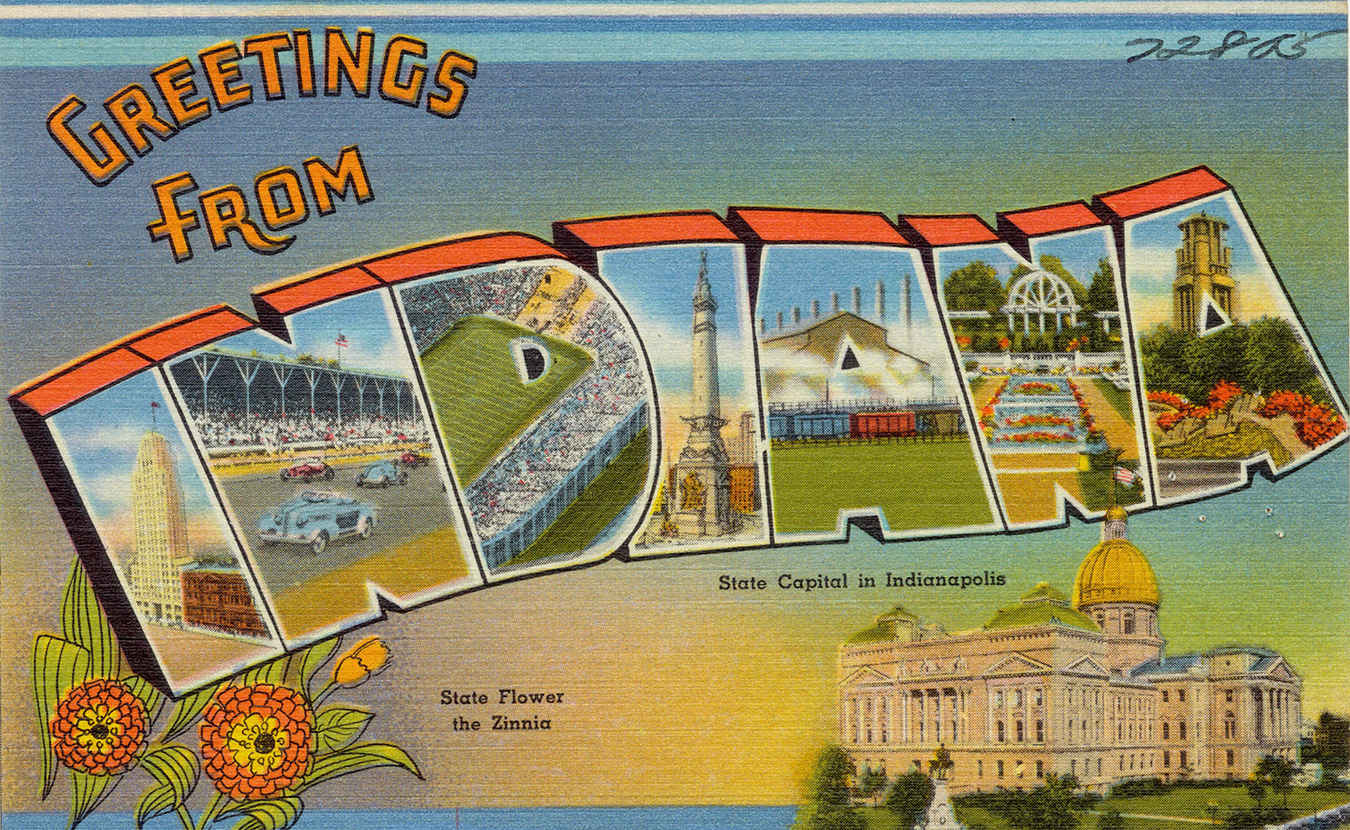 If you’re tempted to hit the road this summer to explore Indiana for its bicentennial, several new books can help guide your way. | Photo courtesy of Tichnor Brothers, Public Domain

Indiana, the smallest state between the Allegheny Mountains and the Pacific Ocean, has so much cultural, social, and political history, you might need a guide to unpack it all. Fortunately, several new books by Indiana Historical Society Press and IU Press are packed with ideas on where to explore the Hoosier state during its bicentennial. Maybe even think of each road trip as a gift to Indiana for its 200th birthday. The books will take you to where the buffalo roamed, Native American civilizations thrived, pioneers settled, battles were fought, future presidents grew up, slaves escaped, literary masters wrote best-sellers, sports legends were made, industries were born, life-changing products were invented, and social and political revolutions took root (just to name a few).

From Indiana Historical Society Press comes a useful source, Road Trip: A Pocket History of Indiana, in which journalist and history teacher Andrea Neal has written stories on 100 “events, figures, and places every Indiana citizen should know.” As Neal puts it, learning Indiana history is required only through the fourth grade, so this is a chance for everyone to become more familiar with the state’s rich history. “It is one thing to read about the War of 1812 in a textbook,” she writes, “it is another to walk across the field where William Henry Harrison’s troops defeated The Prophet’s forces at the Battle of Tippecanoe.”

Neal covers not only a lot of ground, but time and cultures, too. Her list includes museums, monuments, parks, artworks, festivals, and more. She’ll help you reflect on how the Ice Age molded the landscape, how the indigenous people who predated Native Americans lived, and what life in pre-Columbian Indiana was like. She’ll show you where Native Americans co-existed with Europeans, but then fought for and lost their ancestral homeland. (Ultimately, they were forced at gunpoint to leave “the land of the Indians” and take the Trail of Death to resettle in the Kansas Territory.) And she’ll show you how Indiana has grown and become a significant contributor to American culture.

Here are some highlights from Neal’s book that show the richness and depth of Indiana’s history:

Indiana’s first human inhabitants were the Adena, circa 1,000 B.C.E., and while little is known about these hunters and gatherers, remnants of their civilization can be explored in the mounds that dot much of the Midwest. Some of the best preserved of these ancient earthworks are in Anderson at Mounds State Park, which also includes hiking trails, camping, and an interactive visitors center. A replica of the old blockhouse at Historic Fort Ouiatenon Park. | Photo courtesy of Jim Hammer

These two sites are close enough for the same trip. Neal says the French built Fort Ouiatenon in 1717 to “deter British settlement and facilitate fur trade.” There is a replica of the blockhouse, and you can see the Wabash River. (Did you just start humming “On the Banks of the Wabash”?) Before railroads, the Wabash was essential for trade, transportation, and military use, and it became “Indiana’s most important river,” Neal says.

The Tippecanoe Battlefield marks a turning point in Native American history. Shawnee brothers Tecumseh and Tenskwatawa, “The Prophet,” moved their headquarters from Ohio to the banks of the Wabash in 1808 to join the Delaware and Potawatomi tribes. It’s said that in 1811, when General William Henry Harrison defeated Tenskwatawa in the Battle of Tippecanoe, Native American’s lost the claim on their ancestral Midwestern homeland. Thus, this battle helped pave the way for pioneers to settle in the new frontier. The farmhouse at Musée de Venoge. | Photo courtesy of Nyttend

Long before Indiana became known as the Crossroads of America, millions of American bison migrated along a game trail called Buffalo Trace — from the Falls of the Ohio, on the Ohio River near modern-day Clarksville, to Vincennes. The route connected the salt licks of Kentucky with the Illinois prairies. “Indiana’s first highway,” as Neal calls it, was a trench that ranged from 12 to 20 feet wide and can be still be seen in places such as Springs Valley Trail in Hoosier National Forest. In the early 1800s, pioneers traveled this route in their westward migrations.

If you like old travel routes, you may also want to take U.S. Route 40 through central Indiana. Originally known as the National Road, the first federal highway began in Maryland and ended in Illinois and was the route many pioneers took while traveling west in the mid-1800s. A number of those travelers settled in Indiana and helped the state’s population to quadruple in just 20 years. Following Route 40 can still be an adventure, with many landmarks and museums to explore along the way.

In 1796, John Dufour left Switzerland for the U.S. and, soon after, settled in Vevay, Indiana. Neal says southeastern Indiana was “a popular destination for Swiss immigrants fleeing revolutionary Europe,” and Dufour’s vineyards became what is considered the first successful commercial winery in the country. The cottage at Musée de Venoge dates to 1815, Neal says, and is “a rare surviving example of French colonial architecture that was used often by the French-Swiss immigrants.” This house in eastern Indiana is described as “Grand Central Station” for a network of stops along the Underground Railroad. The owners, Levi and Catharine Coffin, were Quakers who built the Federal-style brick house in 1839 (after more than a decade of hiding slaves in their previous home) with many features that enabled them to harbor escaped slaves. A secret room could hide a dozen people at a time, for example, and a well under the house concealed how much water was used. According to Levi, every one of the more than 2,000 slaves who came through this house made it to freedom.

Although it may seem odd that landlocked Indiana has any kind of ship-building industry, it is actually home to the largest inland ship builder in the country. The 68-acre Jeffboat plant specializes in building barges and towboats on the banks of the Ohio River in Jeffersonville and sits across the street from where Indiana made its name in ship building. Beginning in 1820, Jeffersonville became a significant port during the steamboat era. Ships built there had a great reputation and were considered some of the best on the Ohio and Mississippi rivers. The museum, a 22-room Romanesque Revival mansion built by the owners of Howard Shipyards in 1894, is filled with steamboat-era memorabilia. The New York Times’ 1905 obituary for Lew Wallace says he “achieved widespread distinction as a lawyer, legislator, soldier, author, and diplomat [and] was a man of exceptionally refined manner, broad culture, and imposing personal appearance.” Although he was a major general in the Civil War, a governor of the New Mexico Territory, and an ambassador to Turkey, this Hoosier Renaissance man was best known as the author of Ben-Hur — the best-selling novel of the 19th century, according to Neal. (The book, which he reportedly wrote on slate, then copied to paper, was made into a movie in 1925 and its 1959 remake, with Charlton Heston, won 11 Oscars.) Wallace wrote most of the book, which was published in 1880, at his home in Crawfordsville. The museum recently restored the study that he designed and built in 1895 to its original state — a unique blend of Romanesque, Byzantine, and Periclean Greek architecture.

Hoosier basketball. Obviously. The museum is 14,000 square feet and documents Hoosier basketball since the 1890s. Nearby is New Castle High School, home of Trojan athletics and Indiana University basketball legends Steve Alford and Kent Benson. The Trojans play in the nearly 10,000-seat New Castle Fieldhouse (New Castle’s population is not even twice that), which is billed as the largest high school basketball facility in the world. If there’s a flaw in Neal’s book, it’s that she limited the list to a mere 100 (and that she left out The Gables in Bloomington, where Hoagy Carmichael wrote “Star Dust” — one of the best songs ever written). Hoosiers from any of Indiana’s 92 counties can claim numerous other noteworthy destinations — none more so than those in south-central Indiana. Among the hundreds of sites in and around Monroe County that could make any tourist book, Road Trip explores T.C. Steele State Historic Site, McCormick’s Creek State Park, Sample Gates, and the Monroe County Courthouse.

But if Road Trip leaves you searching for more, IU Press has four books that are officially endorsed as Indiana Bicentennial Commission Legacy Projects: Hoosiers: A New History of Indiana by James H. Madison; Letters to Santa Claus by “The Elves”; Shifting Sands: The Restoration of the Calumet Area by Kenneth J. Schoon (January 2017 release); and Undeniably Indiana: Hoosiers Tell the Story of Their Wacky and Wonderful State, with an introduction by Nelson Price (August release). Three other IU Press Books could also strike your fancy this bicentennial year:

IN Writing: Uncovering the Unexpected Hoosier State was written by Bloomington resident Douglas A. Wissing. IU Press calls it “Indiana in all its glory: sacred and profane; saints and sinners; war and peace; small towns and big cities; art, architecture, poetry, and victuals.”

Fellow Bloomingtonian Steven Higgs wrote Guide to Natural Areas of Southern Indiana: 119 Unique Places to Explore, with a foreword by best-selling author and Owen County resident James Alexander Thom. It’s described by IU Press as a “comprehensive, fully illustrated guidebook for nature lovers who want to explore the wild and natural areas of southern Indiana by trail, water, or road.”

These books are about exploring — so pack your bags and hit the road. Along the way you might even discover places with more exotic names — Brazil, Vienna, Hamburg, Canaan, French, China, and Sassafras — all within a car drive. Just don’t forget to say, “Happy Birthday, Indiana!”