150 Species in Indiana Now Listed As Endangered or ‘Special Concern’ 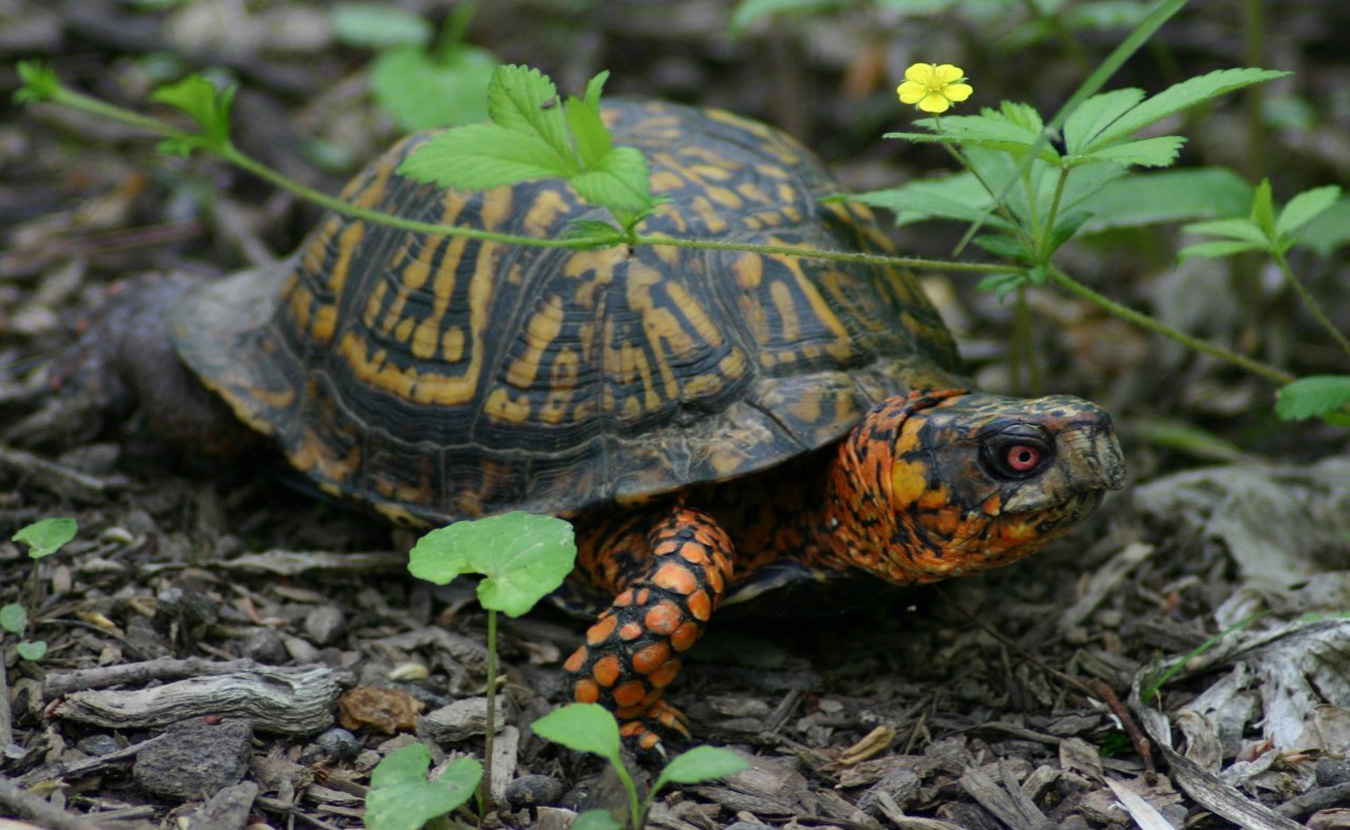 The Eastern box turtle is one of many Indiana species on the state's "special concern" list. | Creative Commons, Branlon

It would be a real shame to see the hellbender go. Or the Mississippi kite. Or, my favorite, the orangefoot pimpleback. A very slippery salamander, graceful bird of prey, and bumpy mollusk, respectively, they are among Indiana’s endangered or threatened species. If we cannot save them, their whimsical names will fade from animal conservation parlance — and, more importantly, their absence could permanently alter the ecosystem in ways we haven’t fully comprehended. The hellbender is a giant salamander on Indiana’s “endangered” list. It can grow to roughly 30 inches long and weigh more than five pounds. | Creative Commons, Brian Gratwicke

Technically, the word “threatened” doesn’t legally apply to species in Indiana. However, as a result of Indiana’s 1973 Nongame and Endangered Species Conservation Act, “endangered” developed real teeth, affording much-needed protection to Indiana-based species in trouble. State endangered species are defined by the Indiana Department of Natural Resources as: “Any animal species whose prospects for survival or recruitment within the state are in immediate jeopardy and are in danger of disappearing from the state. This includes all species classified as endangered by the federal government that occur in Indiana.”

Aside from “endangered,” Indiana also has a category for species of “special concern.” Scott Johnson, wildlife science program manager for the Indiana DNR, says those species of special concern “don’t receive protection under that [1973] act. But they kind of serve as a watch list. These might be species that we don’t know enough about yet to know whether they are secure or not [as a species].”

Special concern species are defined as: “Any animal species requiring monitoring because of known/suspected limited abundance or distribution or because of a recent change in legal status or required habitat.” The Mississippi kite is a bird of prey on Indiana’s “special concern” list. | Creative Commons, DickDaniels

More than 150 creatures — including mammals, birds, reptiles, amphibians, fish, and mollusks — are now listed in the “endangered” or “special concern” categories for Indiana, according to the Indiana Division of Fish and Wildlife list. But who decides which animals make the cut — and how? The timber rattlesnake is a venomous snake on Indiana’s “endangered” list. It can be identified by the distinctive rattle on the end of its tale. | Creative Commons, Tj Green

Indiana has a formal, multiyear process involving teams of ornithologists, herpetologists, mammalogists, and other species specialists from around the state. Working as technical advisors, they recommend additions to or deletions from Indiana’s endangered and special concern species lists. These recommendations work their way through government administrators, public meetings, and calls for public and online input. And, eventually, species like the timber rattlesnake, cerulean warbler, or, say, the rabbitsfoot mollusk — all endangered and inhabiting Monroe County — reap the benefits.

(See “Monroe County’s Most Wanted” at the end of the story for a sample of the county’s endangered and rare species.) If you are lucky, you may be able to spot the cerulean warbler, a small songbird on Indiana’s “endangered” list. | Creative Commons, Mdf

In some cases, state endangered animals are also designated “endangered” at the federal level, falling under the jurisdiction of the U.S. Fish and Wildlife Service. Some prominent examples of these dual listings include both gray and Indiana bats, whooping cranes, least terns, and Kirtland’s warblers. What’s more, 14 out of Indiana’s 17 endangered mollusks also appear on Federal Endangered Species listings. (Yes, sadly, even the orangefoot pimpleback.) Katrina Folsom, communications director for Sycamore Land Trust, says, “Species can be on either or both lists, depending on their distribution. That’s to say that if there aren’t many of a given species left in Indiana, but there are plenty left in another part of the country, then it may be listed as endangered in our state, but it may not appear on the federal list. … Henslow’s sparrows are an example of that. They are on the state endangered list because there are very few left within the state.”

Folsom adds that Henslow’s sparrows “require grassland habitat, and we don’t have a whole lot of that in Indiana anymore — although we have heard them on one of our properties where we’ve been doing controlled burns to bring back the grassland habitat. So we know if you build the right habitat, they’ll come. But they’re not endangered at the federal level.”

Since its founding in 1990, Sycamore Land Trust, a regional nonprofit that conserves natural habitat in 26 southern Indiana counties, has protected almost 9,000 acres of habitat, and the group’s efforts are paying off. “Our properties are home to various [threatened] and endangered species, whether it’s at the federal or state level,” Folsom says. Sightings of numerous rare species — including state-endangered barn owls, short-eared owls, northern harriers, Virginia rails, sedge wrens, and others — have been reported at various Sycamore Land Trust holdings.

Although many of the land trust’s properties are open to the public (download the Sycamore Land Trust Preserve Guide to see which ones), don’t expect an eyeful of endangered species on your first visit. “A lot of these, of course, are hard to find at times because there aren’t that many of them or because, sometimes, they’re just secretive types of creatures,” Folsom says. All sorts of state endangered animals have been spotted in Monroe County, including the barn owl. | Creative Commons, Tim Felce

Still, that’s not to say spying something on the endangered or special concern list is impossible — especially if you head into the right type of habitat with good reference books and an experienced guide. “Try to go out with someone who’s a bit of an expert,” Folsom suggests. You may want to consider searching for wildlife not on the endangered list. “Just by going out and carefully studying wildflowers or birds or frogs, you may well be listening to or seeing something that is on one of those lists,” Folsom says.

Of course, some species — and their specialized habitat — have become so rare that DNR’s Johnson keeps mum about where they can be found: “We try to keep locations confidential, if possible.” Nevertheless, there are plenty of opportunities to see some of the listed critters. “The chances of encountering a bald eagle are pretty decent at Lake Monroe in the winter when the water is open,” Johnson says. “And the chances of encountering sandhill cranes are almost 100 percent, if you go to Jasper-Pulaski Fish and Wildlife Area during the fall migrations.” Another good place to see sandhill cranes? Goose Pond Fish and Wildlife Area in late February and early March. The Indiana bat, which is on both the Indiana and federal “endangered” lists, hibernates in caves but lives mostly in hardwood forests, crop fields, and grasslands. | Creative Commons, U.S. Fish and Wildlife Service Headquarters

One not-so-secretive species from Indiana’s special concern list you are likely to spot? The Eastern box turtle taking its sweet time crossing busy roads. If you encounter one in harm’s way while driving, find a safe spot to pull over, carefully pick up the turtle, and carry it the rest of the way across the road. “As long as you put it in the direction it was going, that’s fine,” Folsom says.

But what if that Eastern box turtle is injured? Unless things look dire, leave it alone. Otherwise, you legally have only about 24 hours to get the animal to a licensed wildlife rehabilitator, such as WildCare Inc., or a vet. (And what about any other injured animals from the special concern or endangered list you might find? Contact the DNR.)

Other ways to help

Ultimately, to survive and succeed, special concern and endangered species need access to their preferred natural habitats — and the food, water, nesting areas, and protection from predators that those habitats provide. Supporting groups like Sycamore Land Trust and donating to Indiana’s Nongame Wildlife Fund are among the best ways to help preserve contiguous swaths of undisturbed land and protect more than 750 wildlife species throughout the state.

There are some simple ways you can make your own homestead friendlier to wildlife, too. Chief among them? Keep the family cat indoors. According to a 2014 op-ed in The New York Times, “Wildlife in this country must share this land with a growing population of about 84 million owned cats, and anywhere from 30 to 80 million feral or stray cats. … Using deliberately conservative assumptions, federal researchers recently estimated that free-ranging cats killed about 2.4 billion birds annually in the Lower 48 states.” Those researchers also attributed the deaths of 12.3 billion small mammals and another 650 million reptiles and amphibians to outdoor cats. The author continues, “In some cases, they are pushing endangered species toward extinction.”

You should also disinfect birdhouses, feeders, and birdbaths to avoid the spread of disease; place bird-safe decals on your windows to reduce bird-window collisions; and plant native perennials to provide food and shelter for area wildlife.

Here’s a sample of some of the endangered and special concern species that call Monroe County home.