New Pekin, Ind., Has ‘Oldest’ 4th of July Celebration in the Nation 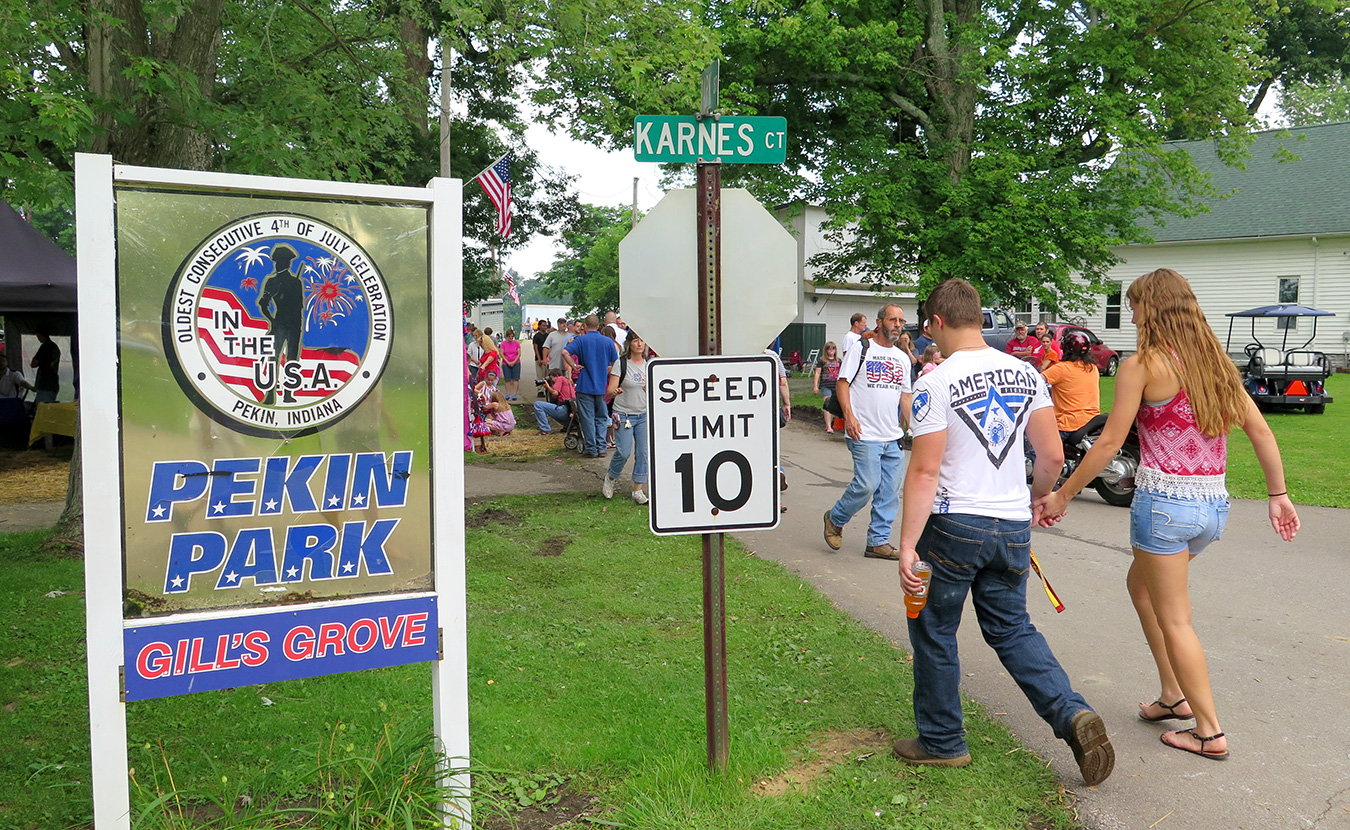 Every year since 1830, New Pekin, in southern Indiana, has celebrated the 4th of July, making it what the townspeople say is the “Oldest Consecutive 4th of July Celebration in the Nation.” | Limestone Post

While the United States celebrates the 240th anniversary of the Declaration of Independence and Indiana celebrates 200 years of statehood, the people of New Pekin, Indiana (population 1,400), are celebrating their 186th consecutive 4th of July celebration.

You may not have heard of New Pekin — not long ago, I hadn’t either — but just south of Salem on State Road 60, along the Blue River, New Pekin’s townspeople claim the rights to the “Oldest Consecutive 4th of July Celebration in the Nation” (and The Library of Congress agrees).

If you took a 30-minute walk around New Pekin any other time of year, you could pretty much see it all. There’s a diner, a pub, a small park, a gas station, a high school, and a smattering of old and new houses that sit along the quiet railroad tracks running through town. It’s one of those places that, as a kid on a car trip with my parents, I would have counted the seconds from one edge of town to the other while passing through, then yelled loudly at my Dad, “That was a 17-second town!” — or whatever it was. The four-day event is filled with entertainment, including live music. | Limestone Post

That all changes for a few days in the beginning of July. Every year since 1830, the townsfolk have come together and put on something special. Organized by the nonprofit Pekin Community Betterment Organization (PCBO), the 4th of July Celebration is a three- to four-day event that brings 10,000 to 15,000 people to this otherwise quiet town. (Imagine an event in Bloomington, for relative comparison, attracting 850,000 people — or the entire population of Indianapolis.) The PCBO says it all started with a few families coming together for a picnic. The history of New Pekin resembles that of so many other small towns across America. In 1831, the place originally known simply as Pekin was laid out by a man with a Christian name, where a wagon trail crossed a small river. When the railroad came through in the 1850s, businesses slowly shifted closer to the train station, and the town became New Pekin. During those years, people in the surrounding towns didn’t have many options for social gatherings, so the 4th of July celebration in New Pekin grew quickly. And they’ve been at it ever since.

This year, festival goers can enjoy a four-day celebration — starting at noon on Friday, July 1, and running throughout the long weekend to Monday evening, July the 4th. The PCBO packs each day with entertainment and events that include the largest fireworks display in Washington County, a parade, live music, men’s and women’s basketball tournaments, a carnival, food vendors, a flea market, the reading of the Declaration of Independence, prince and princess contests, horseshoe pitching contest, a queen contest, numerous cookouts, a “Pekin Idol” singing contest, fundraisers, and many other celebrations around town. You can see the entire schedule of events here. I have to admit, my 30-year-old, sarcastic gut reaction to hearing about this story and assignment was thinking how it’s probably just another small-town festival. They’re all over the place — what’s the big deal? But I grasped the importance of this event the moment I spoke to Anita Temple, president of the PCBO, when she stated simply, “It’s special to us. … It’s what we’re known for.”

Anita and Darlene Anderson, the PCBO’s self-proclaimed director of the queen contest, shared with me their enthusiasm about this massive festival happening in such a surprising location. They said that from the time they were children (both having been born and raised in New Pekin) this event has been celebrated “like Christmas.” Their children get excited weeks in advance when they see the sign advertising the event go up over Highway 60. And the outpouring of support, both morally and financially, from local businesses and residents shows how important this tradition is to everyone in town. The 4th of July is celebrated “like Christmas,” and excitement starts to build when the sign goes up over Highway 60 a few weeks in advance. | Photo by Michael Waterford

The people of New Pekin identify with this celebration and holiday on an enviable level. They take pride in their country, their home, and its history; have reverence for the sacrifices of those who have come before; and find fulfillment in how they share that with the rest of the world. If you’re like me, your jean-short wearing, basketball playing inner-American just swelled its chest a bit. Michael Waterford grasped the importance of this event when Anita Temple, president of the PCBO, stated simply, “It’s special to us. … It’s what we’re known for.” | Limestone Post

Try to think of any other Indiana tradition that has been going for so long — I bet you can’t. I’m a community-minded person who hosts and volunteers for a number of events around Bloomington — I know how hard it is to keep an event going year after year. It’s hard to fathom a tradition like this, because such a long-standing event doesn’t happen much anymore.

It took generations of care and work for our southern-Indiana neighbors to keep such a joyful event going. And it’s that respect for our past and tradition that I would like to see more of in America. Making it down to New Pekin will give you a taste of their town and this incredible tradition.