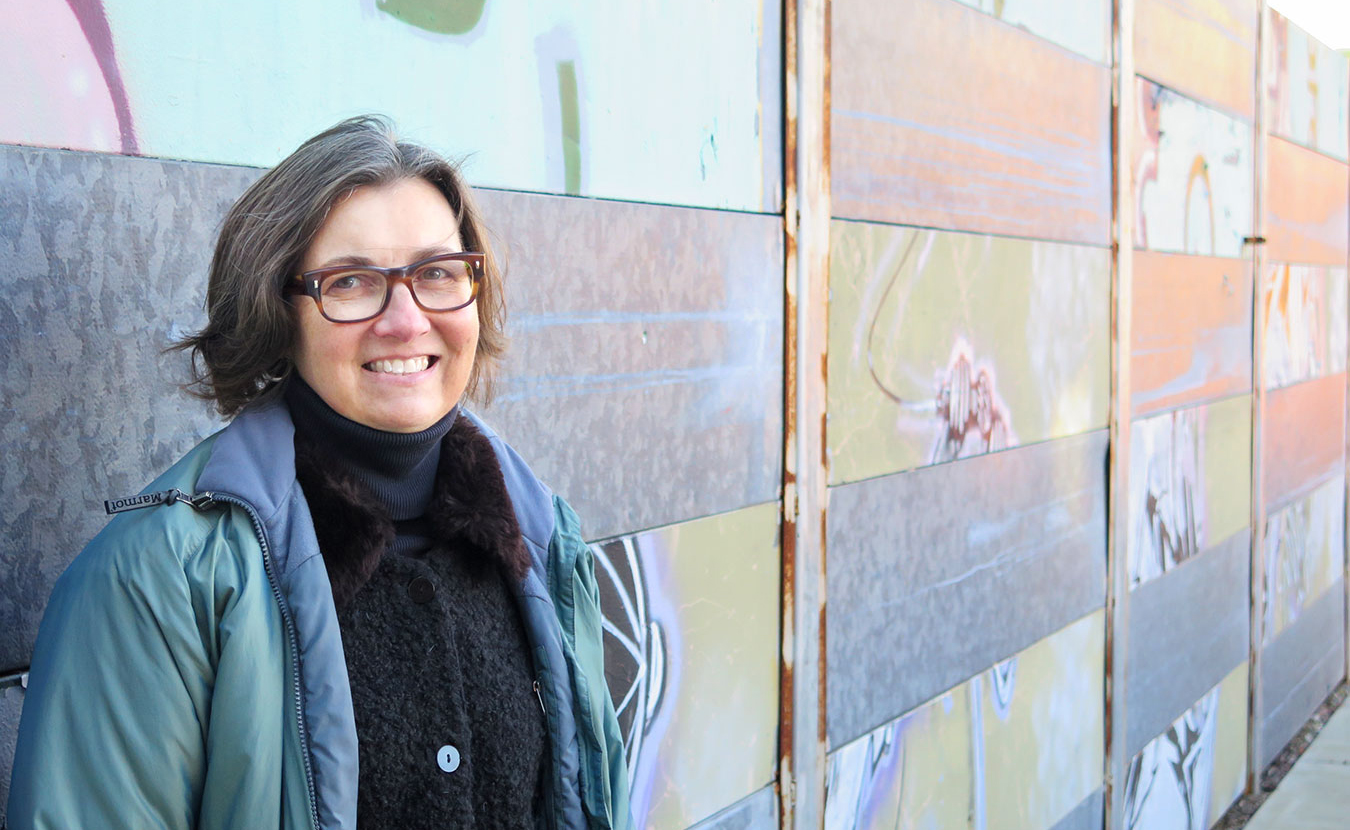 Cynthia Brubaker has had more than a hand in preserving some of Bloomington’s most iconic buildings. | Limestone Post

“I love to look at buildings. That’s one of my favorites things, to go into an old building and think about the possibilities.” So says preservation developer Cynthia Brubaker.

A force behind the I Fell building, the new Middle Way House headquarters, and the Frosted Foods building, Brubaker fell in love with architecture — and old buildings — at a young age. Born in Indiana and raised in Maryland and Pennsylvania, she returned to the Hoosier State to study art at Goshen College. “I planned to study architecture in graduate school,” she says.

She moved to New York City and applied for a job at Columbia University. While there, she became transfixed. “I picked up Columbia’s catalogue and saw page after page after page of architectural history classes — I thought I’d found heaven,” she says.

Columbia, at the time, had the country’s first and foremost historic-preservation graduate program. Walking down the halls one day, she came upon a poster for the program. It featured a line drawing of the first Helen Hayes Theatre that’d recently been demolished. It’d been a great architectural loss. “I looked at the poster,” she says, “and thought, That’s for me.” She enrolled and learned drafting and architecture, architectural history, conservation of materials, planning, and so on — “all of those things that come together to make this person who can work with old buildings and knows what to do with them,” she says.

Downtown Bloomington’s full of historic structures, and Brubaker had a hand in restoring plenty of them. “We have lots of industrial buildings on the west side,” she says. “It’s trendy to want to have a business or an art studio in an industrial building. Twenty years ago, this was not considered a worthy effort.”

After graduating from Columbia, Brubaker returned to Indiana again to work for the historic preservation division of the Department of Natural Resources. Then she went to work as a preservation specialist for the architectural firm Portfolio Design. Her first memorable project was the building on the north side of the Courthouse Square that today houses Pictura Gallery. “Older folks may remember it as Alden’s Department Store,” she says. “The folks who owned the building were interested in doing something with it. I suggested we do it as a historic rehab. I kind of convinced everybody to move ahead with that.”

Brubaker has been an independent contractor for Springpoint Architects for the past year. Two decades ago, she helped resurrect the Frosted Foods building that the firm calls home. Anchoring the rejuvenated industrial-building enclave on South Rogers Street, Frosted Foods is surrounded by several rescued treasures. “We’ve got this happening little corner going,” Brubaker says.

The I Fell building is Brubaker’s gem. A cultural locus for the city, it houses galleries and studios and draws hundreds of visitors for its regular First Friday openings. The place has a checkered history.

“It was built for an Auburn/Cord/Duesenberg auto dealership,” Brubaker says. Before the structure was finished, the Great Depression had killed the market for luxury cars, leaving the building’s owner, Isaac Fell, with a white elephant. “They never did sell a new car,” Brubaker says.

“So the Fells sold used cars, used furniture, and clothing, they scrapped out cars and had their first metal scrapyard to the south of the building, and there were beauty shops and barber shops,” Brubaker says.

For years, Brubaker, who lived down the street from the Fell, had walked past it, admiring its rugged, strong elements. She dreamed of turning it into a showpiece and a showplace for art exhibits. In 2012, she got her chance. “I got a five-year lease on the building and entered into an agreement to do work on it,” she says. “Then I sublet to the artists and the Rainbow Bakery.”

Brubaker planned and oversaw the effort to replicate original design features based on old photos and to expose its structural elements. I Fell building, on the corner of West 4th and South Rogers streets. | Limestone Post

“I knew from seeing it all those years, its brick walls, concrete floors, metal truss structural system — it’s a good, sound building. It didn’t need a lot of heavy duty work. It needed a lot of dressing up, so it was a manageable project,” she says. “It will stand at least as long as it has so far.”

As a contract employee for Middle Way House, Brubaker was key in making then-Executive Director Toby Strout’s goal of building a unified housing co-op and program headquarters a reality. Middle Way House had the opportunity to purchase the old Coca-Cola bottling plant on South Washington Street from another nonprofit, and Brubaker went to work. “I was involved from the beginning of the real estate transaction all the way through helping to raise the money and hiring an architect and a contractor — that whole process to restore the plant and build a new building next to it and connect them in a way that worked for the needs of Middle Way House,” she says.

Brubaker remembers watching workers repair the lovely green terrazzo flooring in what’d been the production area of the old plant. “It got beat up where the Coke would spill over (in the production line). That is where the terrazzo was most pitted out. You know that old Put your tooth in a bottle of Coke and it’s gone in three days? That’s what it does to concrete as well. So we had that repaired and that was really fun. To watch an entire wheelbarrow of green concrete be mixed up with the little chips of rock that go in terrazzo, it was really a fascinating day.”

Brubaker for years has walked and driven around Bloomington, noticing old structures and envisioning their rebirths, but the opportunities to deliver on her dreams are dwindling. “They’re going fast,” she says. “Ironically, you go to any town around Bloomington and you have buildings galore. You have supply but you don’t have the demand. Here in Bloomington, almost every cool old building has been repurposed in some way. A lot of them I’ve had a hand in, which makes me feel good, but on the other hand, where am I going to turn now?”

[Editor’s note: You can listen to the full interview on WFHB here.]

More About the Fence

Much of the work in historic preservation involves salvaging and repurposing old materials. It’s one of the issues foremost on the mind of Cynthia Brubaker — a preservation developer who has helped bring many an old building back to life in Bloomington — when she’s working on a project. For example, when she helped restore the plant for the Coca-Cola Bottling Company on South Washington Street into a home for Middle Way House, two metal building additions behind the main brick building were disassembled.

“We stored many of the metal sections, as we had interest from folks who wanted to reconstruct the buildings on other sites,” she says. “Eventually I had the idea to use sections of the metal for the wall you see today.”

The facades of the buildings had been covered in graffiti murals in the 2000s. So Brubaker had workers install the fence in a checkerboard pattern, alternating sections with and without graffiti.

“One day, after the wall was installed, I saw a young man painting new graffiti on the back wall of Rhino’s [Youth Center] across the alley,” Brubaker says. “His work looked like some of the work on our new wall. I asked, and, indeed, it was his work. Mike Birchfield is well known around town as a graffiti artist. I asked him what he thought of us using his work the way we did. He said, ‘I never thought I’d see it again.’” —LP