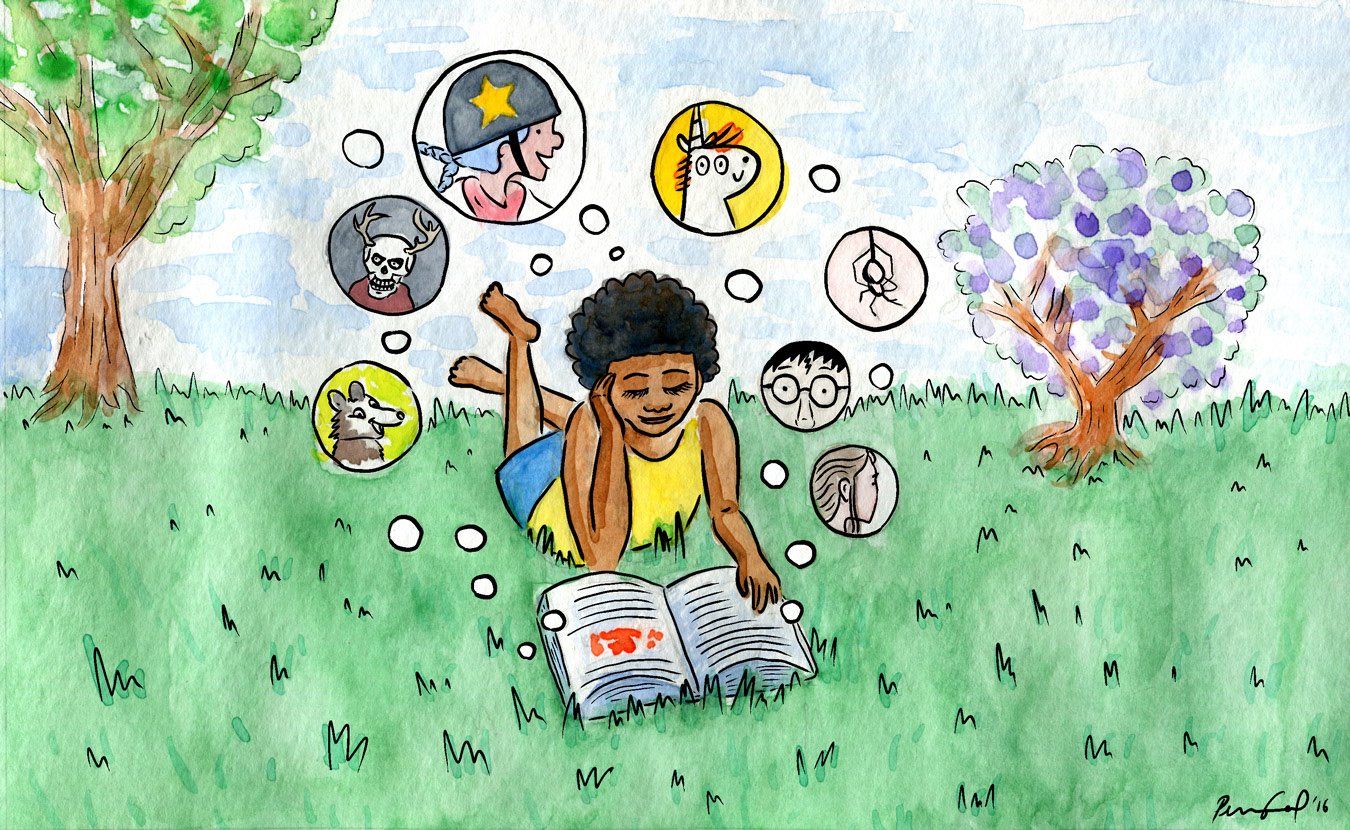 Ah, summer. No more pencils, no more books — you know the rest. But hold on a second! Books can be a fantastic part of summer vacation. Summer reading keeps kids’ brains working while they’re away from school, and even the most active kids can enjoy a little down time with a good book. Avid readers relish the idea of long, lazy summer days and fat novels, but reluctant readers may need a little more motivation. Check with local libraries and bookstores for summer reading programs — sometimes a little reward will be just the nudge a kid needs to pick up a book. E-books, comic books, fiction, or nonfiction, anything that gets a kid reading is a great book!

For some summer reading inspiration, Mary D’Eliso, librarian at University Elementary School and all-around excellent person, gave us a selection of titles to while away the summer days.

If you like the picture books of Mo Willems, you might try those of Bob Shea. Unicorn Thinks He’s Pretty Great, Kid Sheriff and the Terrible Toads, and others will provide cheeky humor that parents will also enjoy. If you’re outgrowing Frog and Toad, you might be ready for a next-step-up chapter book series. Cork and Fuzz by Dori Chaconas features a muskrat and possum duo that illustrates how we can have satisfying friendships with others unlike us. Start the series with Cork and Fuzz: Short and Tall.

The modern kid who devours Diary of a Wimpy Kid books would likely enjoy Tom Angleberger’s series about Origami Yoda. Is a folded piece of paper actually a soothsayer? When word gets out, everyone wants Origami Yoda’s advice.

Animal lovers who prefer classics like The Mouse and the Motorcycle or Stuart Little will make friends with Humphrey, the class pet from Betty Birney’s series. The first is called The World According to Humphrey.

Those who liked Raina Telgemeier’s graphic novel Smile, should lace up their skates for Roller Girl by Victoria Jamieson. Can roller derby camp help Astrid with the bumps and bruises of growing up? Also try El Deafo by Cece Bell. If fantasy graphic novels are more your speed, try the Amulet series by Kazu Kibuishi.

If you love Charlotte’s Web, cherish that. There is no other like it. Another compassionate animal tale — that of a mall gorilla — is The One and Only Ivan by Katherine Applegate.

Haven’t read the Harry Potter books? Do that. Now. If you have read them, read the Percy Jackson series by Rick Riordan. And if you’ve read that popular series, try The Book of Three by Lloyd Alexander or a newer series, the Wildwood Chronicles, by Colin Meloy, lead singer of The Decembrists.

There are so many classic novels of misunderstood or mistreated children with indomitable spirits that it may be hard to choose. But settle in with The War That Saved My Life by Kimberly Brubaker Bradley. Ada is a quite-alone, physically challenged child who must save herself against the backdrop of the children’s evacuation during the London Blitz. Unforgettable.

Editor’s note: For ease, we’ve linked all of the books to Amazon, but be sure to check out local bookstores, such as The Book Corner or Boxcar Books, before buying online! Also, all of the books mentioned above are available for free at the Monroe County Public Library.

Jen Hockney Bratton started her career in television, working on everything from local PBS productions to the Kentucky Derby. When the Internet came calling, she went to work for Oprah Winfrey as a content producer for Oprah.com. One move to Bloomington and two kids later, Jen followed another passion and now teaches fitness classes at Bloomington Body Bar. She loves to write, read, spend time with her husband and daughters, and cheer on the Hoosiers.

Penina Gal is an illustrator, cartoonist, painter, and a graduate of The Center for Cartoon Studies (yes, it's real). Penina currently lives in Providence, Rhode Island, after a delightful stint in Bloomington, and has had comics and illustrations published in Cicada Magazine, Narratively, and Seven Days, among others, and a prize-winning comic published by Paper Rocket Minicomics. More art, comics, and things can be found at penina.net and housebat.studio.
Tagged
Comments